Because my younger sister Pamela lived in England, she was able to put us on video call, and we cut a cake and danced together. My mom sat there and drank her wine. We all cheered her on, and drank wine on our end, and had no idea what was coming.

Her birthday is March 13. By the 15th, she was starting to cough.

She had three girls and one boy. Out of the three of us, I always say that I was my mother’s favorite child. She was subtle in how she expressed that; parents don’t have favorites, right? But they do! Enough that my sisters would joke about it and tell her, “Oh, your little girlfriend,” [talking about me]. And out of all of us, I’m the one that looks like her. I was very close to my mother, in ways that were both healthy and unhealthy.

My parents, they sent me to the States [from Uganda] when I was 14. Moving away from my parents at that age sort of created this phobia, particularly toward my mother, where I spent most of my adult life fearing her demise. I talked to my mom sometimes two times, three times a day. I would call her every day. In some way, I needed to know she was okay. I don’t think that occurred to me until she passed.

The day I found out that she had passed, I was struggling with three emotions: Oh my God; this relief that I would never have to fear her passing ever again; and then, of course, the reality of it set in.

My mother dying in the way that she did, because she was sick of COVID, I wasn’t able to talk to her leading up to her passing because… she couldn’t breathe properly and it hurt to even speak. That was the most painful thing.

She eventually text messaged me about three days before she passed, saying, “I’ll be okay. I’m getting better, I’m still weak.” Days later, she went to sleep and never woke up.

I got the 3 a.m. call. My sister was on the call from England, my stepfather, and my sister Catherine in Massachusetts. And the first thing I hear from my younger sister, the words, “Mom is gone.”

My mother taught me to always be there for family. If it wasn’t for family at home in Uganda, I don’t know how we would have been able to repatriate her.

When she passed, we had to have her at the undertaker in England for six months. It was the hardest six months I’ve ever lived through. My family in Uganda had to arrange everything. I had to sit in my house and watch her funeral on Zoom with my best friend who had to sit in another room. We couldn’t even hug each other because of COVID.

It was an amazing, amazing funeral. My mother was buried in a way that only a queen can be buried.

At that time, they were only allowing 15 people at a funeral. My mother drew 120 people outside in tents.  My cousin knew my mother very well, and apparently they’d had a conversation about what she would want if she died. Her favorite drink that she wanted people to be served with, apparently, was Prosecco. So, she literally had servants walking around the grounds serving wine, and music, and it was absolutely amazing..

I knew she had touched many lives. I did not know to what depth. I never knew half of the things that my mother did for people. She was just a very peaceful, quiet giant. She shared herself so much.

She has since made herself so visible in such tangible ways. I was looking for old receipts and I found this letter. It was a handwritten, four-page letter that she wrote to all of us, my sisters and my brother, Tendo. That letter contained words as if she wrote it the week she passed. She had written that letter 20 years ago.

Her first words in that letter say, “I am so proud to be a mother of three ladies and gentleman.” She goes on to talk about how she didn’t always feel she was the best mother.

She’s so wrong. She was the best.

A portrait of Joan Kigozi by BEN ZIRABA NYENDE 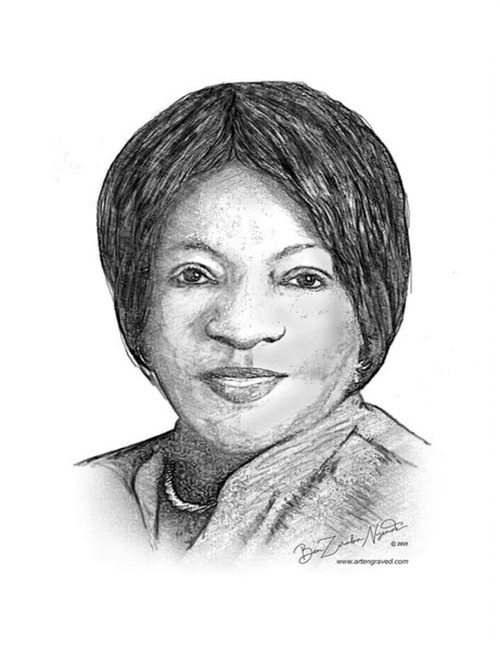